Celebrating the work of British mid-century sculptor Brian Willsher, the exhibition is the first to show Willsher’s private collection of works.

Twelve Brian Willsher sculptures also form the content of the Margaret Howell calendar 2022. The sculptures selected for this calendar are an accurate representation of the morphic, fluid forms that Brian Willsher became well-known for. With sweeping curves, concentric rings and hardwood geometry, they each developed their own distinctive patina over time. They look both elegant and magnificent from every angle; catching light and shadow, promoting continuous curiosity and allowing us to interpret the forms in whatever way we see fit.

'It was Brian Willsher’s affinity with wood that drew me to appreciate his work. The mastery and sheer joy of working with his favoured material is evident in his sculptures. 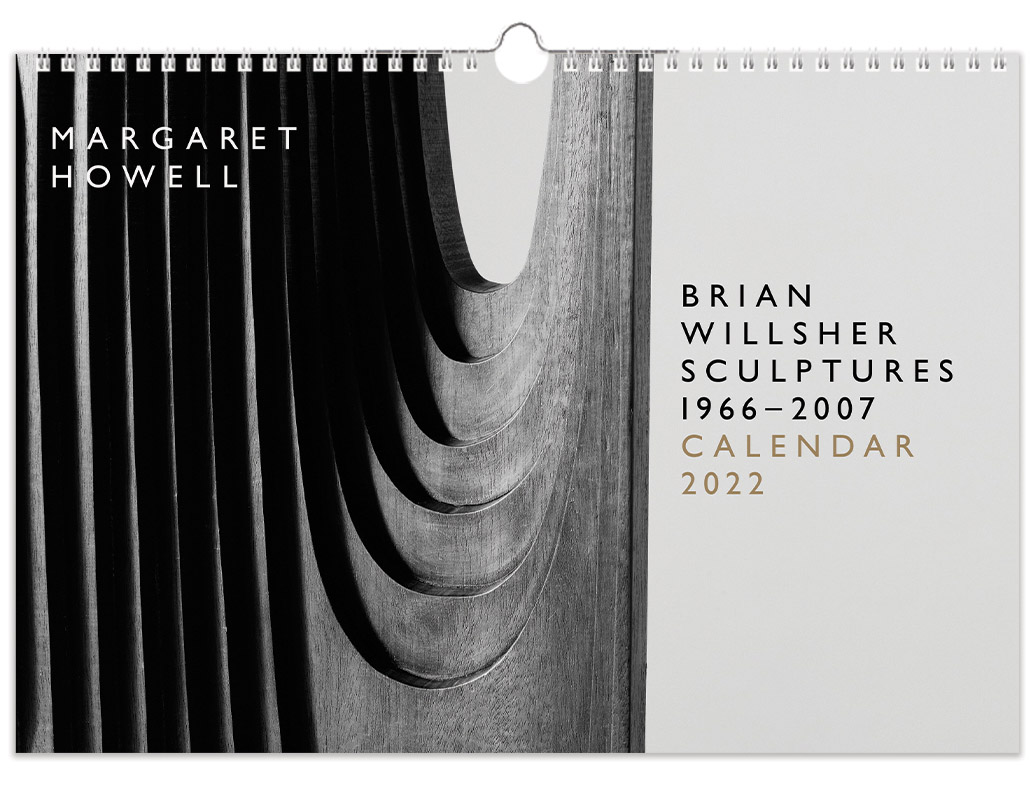 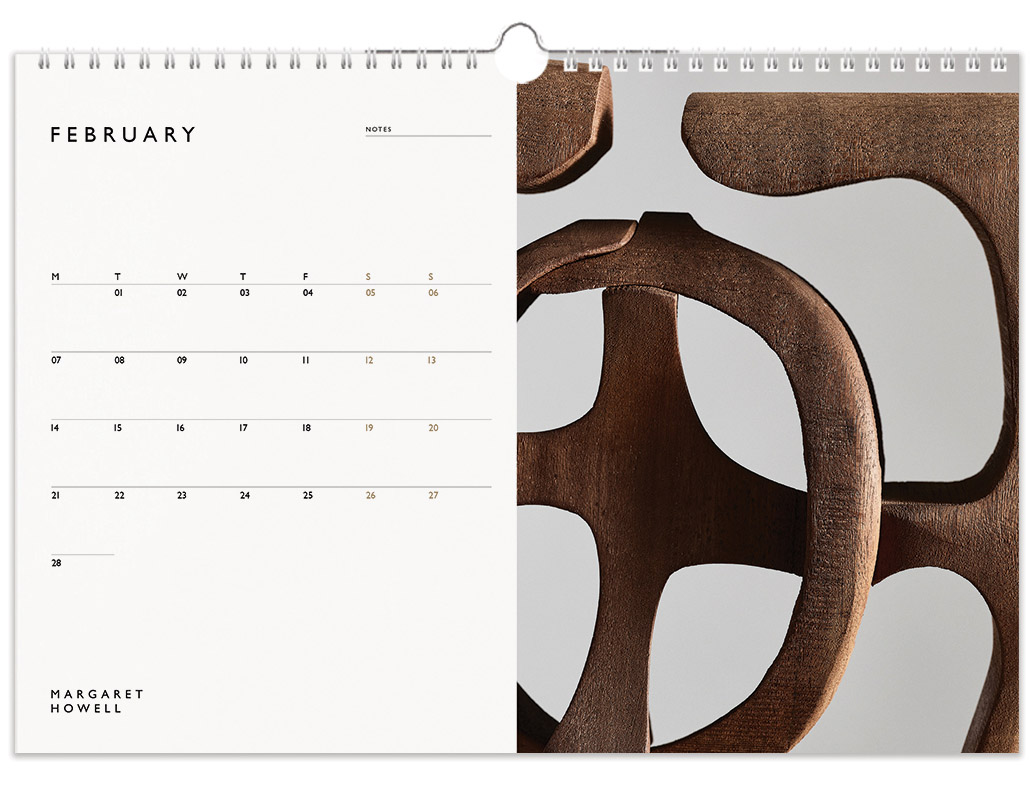 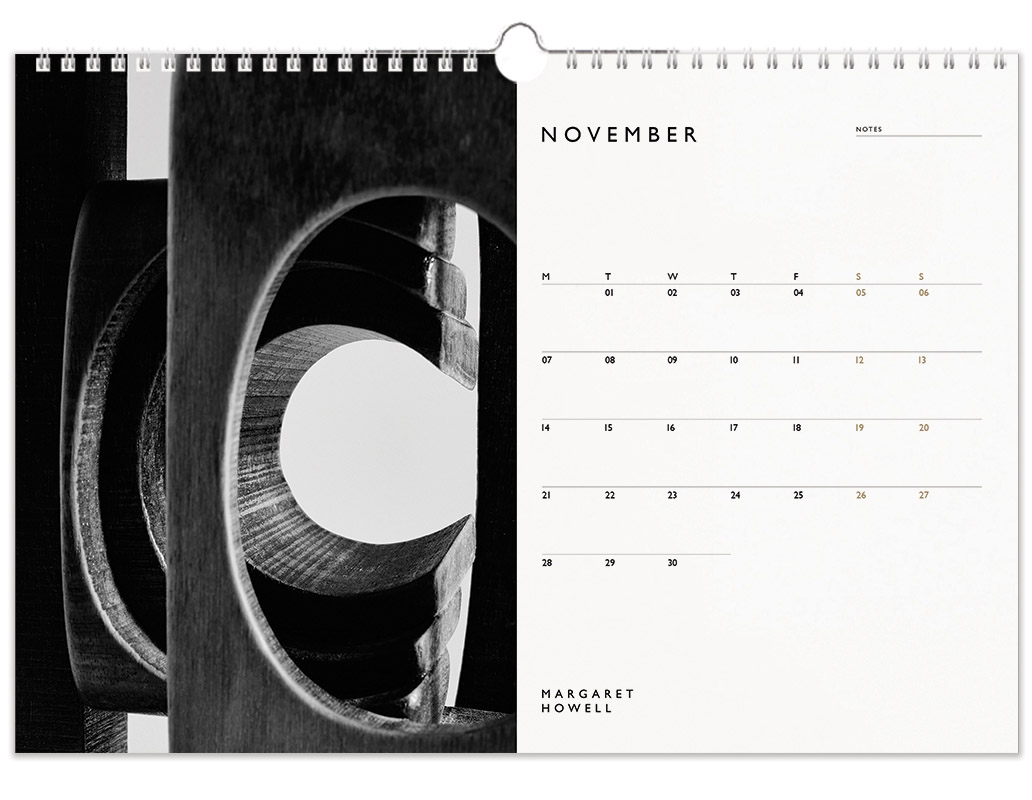 For British artist Brian Willsher, building a career as a successful sculptor was never intentional. Born in 1930, he studied engineering at Woolwich Polytechnic and drifted through a variety of different professions before retraining as a dental technician. An avid motorcycling fan, he had a serious accident during a race at Brands Hatch in 1953, which led to an extended period of convalescence. With numerous injuries and limited capacity, he began experimenting with plaster and spent the next six months making small ornaments and animal figurines, which he sold for a nominal sum.

A post-recovery camping trip to Guernsey in the late 1950s altered Brian’s outlook and after returning to London he made the decision to leave his job and turn his attention to making hand-carved wooden salad bowls. With slow sales, a local shop owner suggested he try making wooden table lamp bases instead. He accepted the suggestion enthusiastically and within a few months his creations were selling rapidly at Heal’s, Liberty and Harrods.

It was an invitation to hold a standalone exhibition at Heal’s in 1966 that shifted Brian’s output from functional domestic items to complex sculptural forms. He filled the department store with 150 sculptures of various sizes and sold 147 in the first two weeks. The remaining three were kept for his personal collection. When asked to describe the principle behind the works, Brian once shyly explained, “It’s just doodling – in wood”. 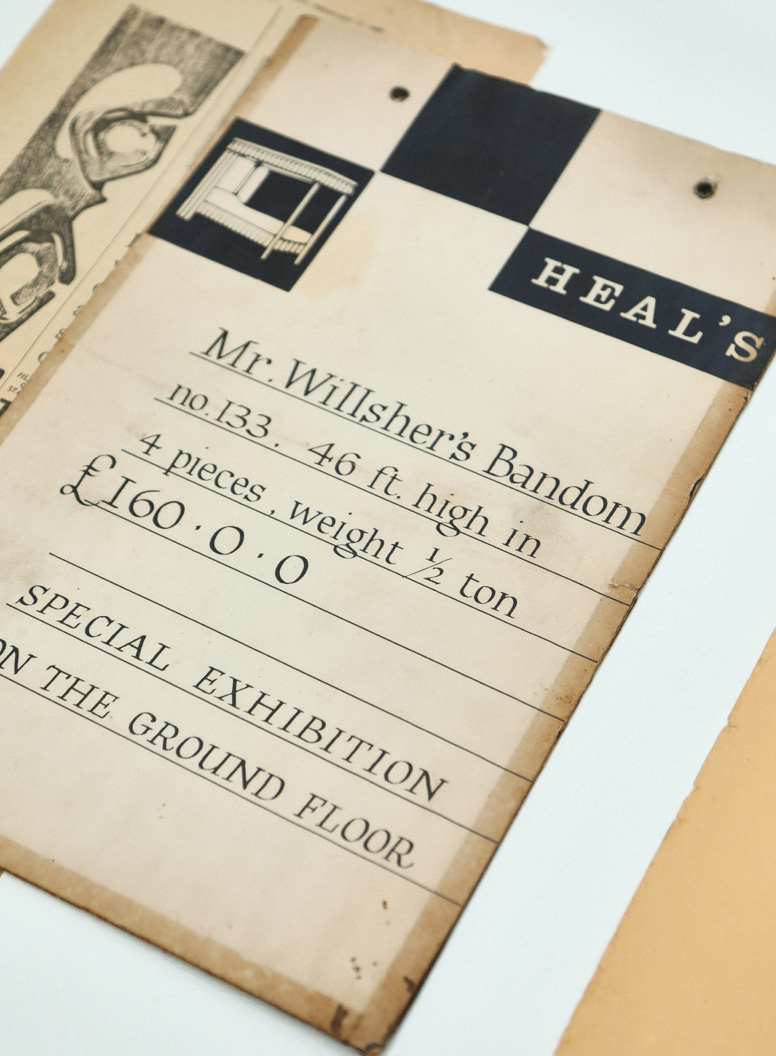 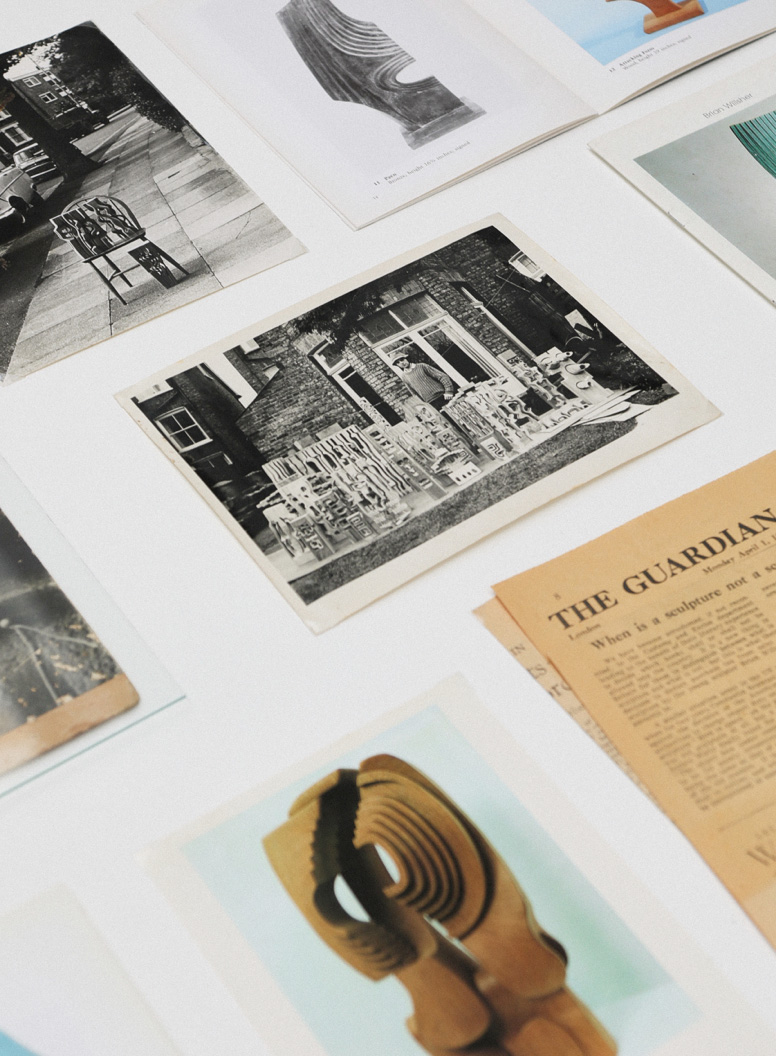 Art critics and gallerists from around the world were suddenly hailing Brian Willsher as the new, unique voice in British sculpture – an accolade that didn’t sit well with Brian. Naturally down-to-earth, he felt uncomfortable with the plaudits, preferring to see himself as part of a humble, cottage industry. Eschewing the limelight, he cemented himself as a maverick outsider when he priced a large sculpture being shown at the Royal Academy at the joke sum of £50. His sense of humour was lost on some, but he gained lifelong fans from the likes of sculptor Henry Moore and the writer Bill Hopkins. Sir Herbert Read, the art historian and critic described him as, “A master of enigmas, his art propounds beliefs in beauty without precedent.” 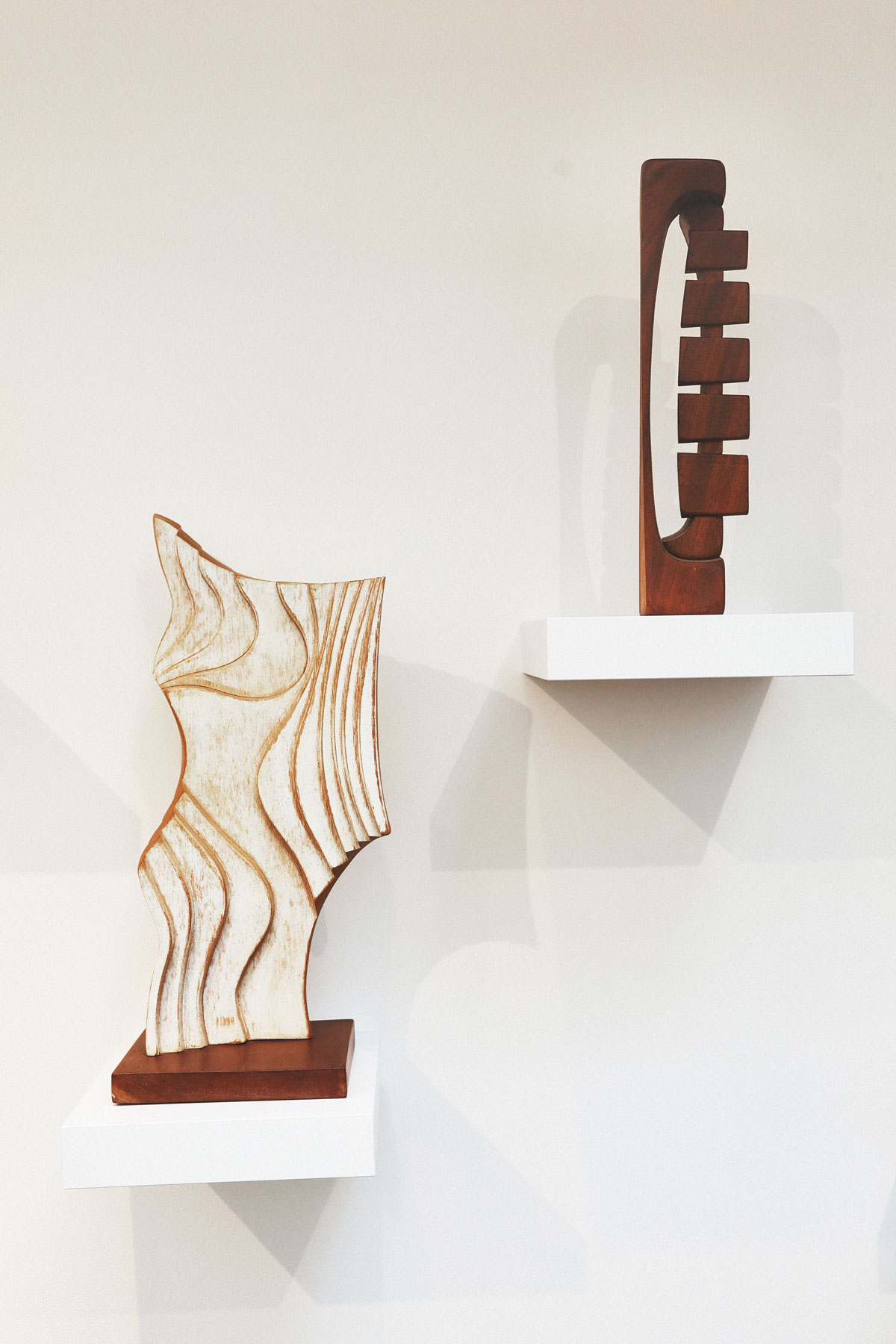 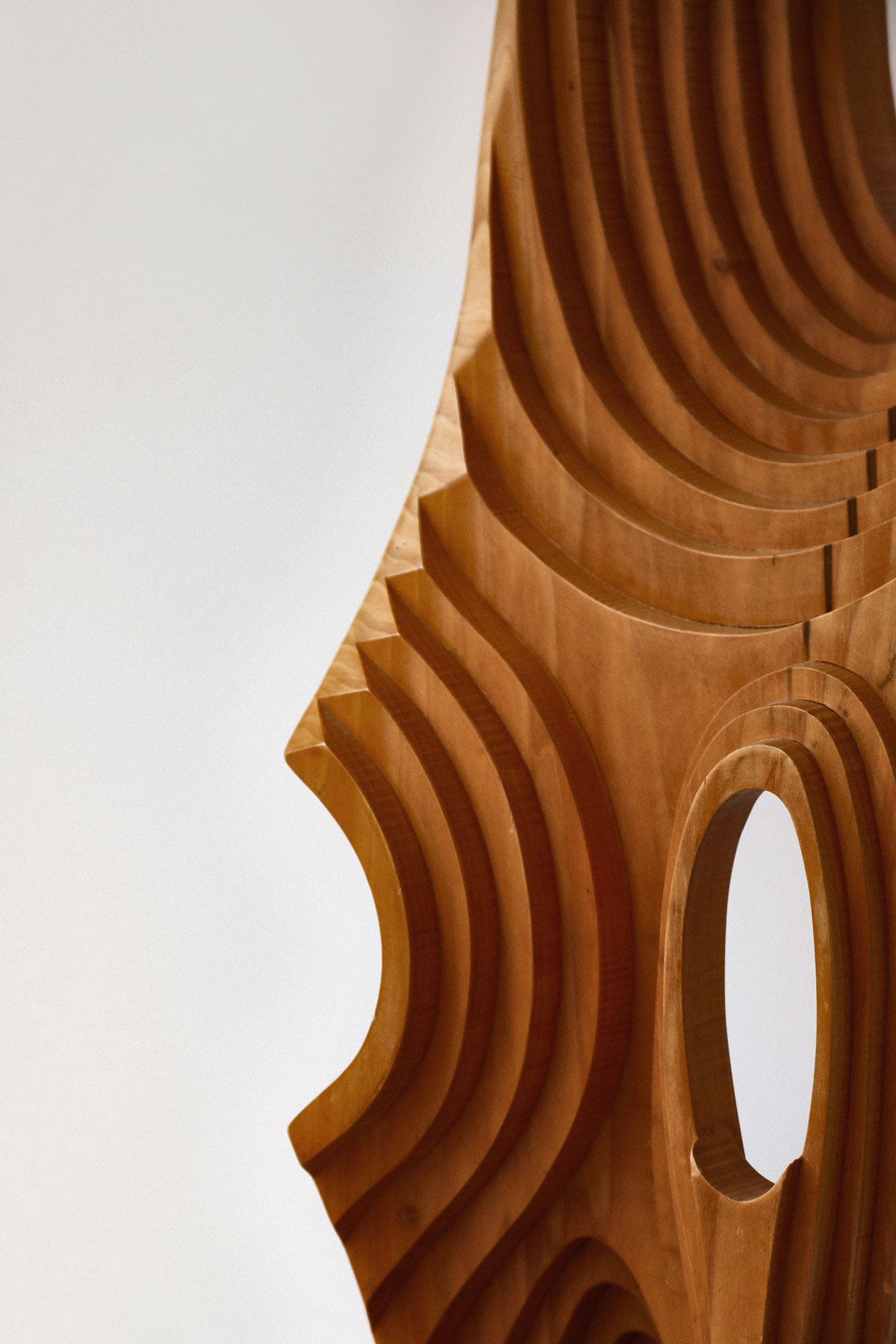 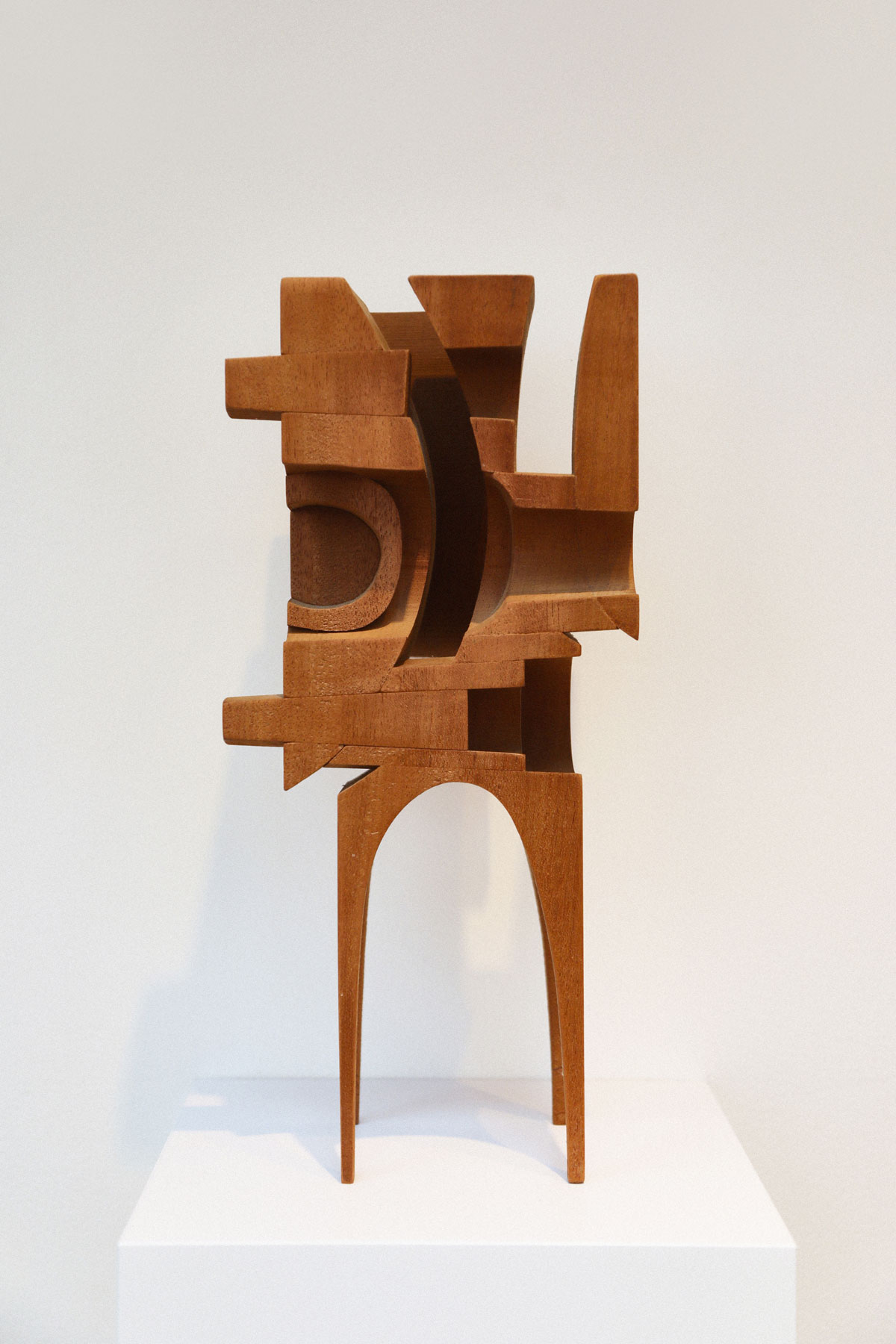 The introduction to our 2022 calendar incorrectly refers to the 20th century sculptor Henry Moore as ‘Sir Henry Moore’. In fact, the artist turned down the honour in 1950. Find out more about Henry Moore and his work at Henry Moore Foundation